Throughout history as cultures took on different beliefs, the status of canes, walking sticks and staffs changed.

In the early 1700’s, the first settlers in America used canes as a status symbol of wealth and refinement. Over time, the Puritans passed laws which wouldn't allow extravagant dress or displays of wealth. This, in turn, altered the perception and appearance of the canes and walking sticks used.
<!--[if !supportLineBreakNewLine]-->
<!--[endif]-->

In London England (1700’s), a gentleman had to procure licenses for the privilege of carrying canes. It was expected that they would abide by certain rules or risk loss of the privilege. The authorities actually policed rules for canes and walking sticks vehemently. It was considered an extreme violation of manners to carry a walking stick under one's arm, to brandish it in the air, drag it on the ground or to lean on it while standing.

It has been a long time since a walking stick was a status symbol for men and woman. Some, like the bishop's staff and the scepters of kings and emperors, are still a part of ceremonial dress and traditions even today. Walking sticks and hiking sticks have, historically, been used by those travelers looking for support while exploring nature and finding new worlds. Whether trekking through the snow, climbing mountains or crossing the great plains, a hiking or walking stick was often a useful tool for safety and to reduce fatigue.

The show of power or status that canes, walking sticks & staffs had in days past, makes it understandable that they became a fashion accessory for the wealthy and influential in so many cultures. Today the walking cane is a valuable mobility aid, yet still can enhance one's fashion or style when chosen carefully. The modern world offers so many unique choices for the walking cane user, that the stigma of walking with a cane has been replaced with fashion and admiration for the walking fashion accessory.

In some instances, the walking stick replaced the sword as an accessory to dress in the 19th century, then the umbrella gradually replaced the walking stick in the beginning of the 20th century (especially in England). Now Canes Canada offers an umbrella and walking cane combination for the gentleman that wants to be prepared for all circumstance.

Early in the 1900's we changed the way we view canes. It is disappointing that canes began to be viewed as a medical device, which is why so little attention was placed on the appearance of the canes available for many years. Clumsy, noisy and medicinal looking became the norm. This is where the stigma of walking with a cane began. They were awful looking, hard to use, poorly sized and just plain garbage compared to what is available today.

Canes Canada takes pride in helping our clients understand that a cane is more than a medical walking aide in this modern era.

A cane no longer suggests age or weakness, but rather is an accessory to enhance our wardrobe while at the same time enhancing mobility to keep us safe and active.

Finding a cane that suits both our personality and physical need has become easy at CanesCanada.Com since we carry a full selection of walking canes, walking sticks, and hiking sticks & staffs. A style for everyone so we can all walk safely and with style.

Just take a look through our selection and you will find the right one for you or your loved one..

Walk with a Smile and Walk with Style® with CanesCanada.com.

Simply measure ahead & we cut to size for FREE! 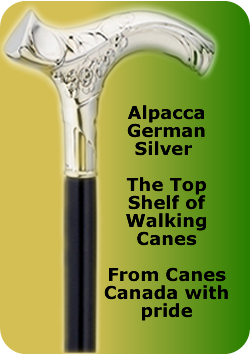